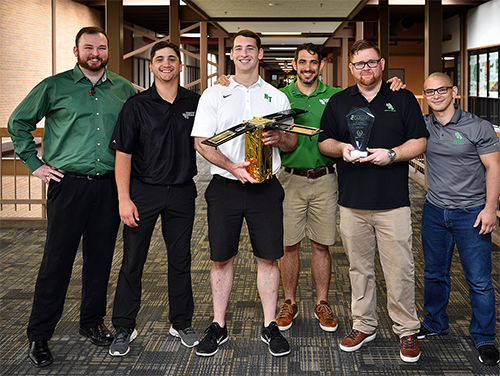 A team of College of Engineering seniors have created an energy efficient system for controlling solar panels on CubeSats using a nickel-titanium shape memory alloy.

CubeSats, sometimes called micro-satellites, can be as small as a 4-inch cube. They often use off-the-shelf parts and are inexpensive to launch into low-earth orbit. CubeSats can be used for everything from general research to communications and Earth observation.

Shape memory alloys have the ability to alter their shape in response to temperature changes. These changes can be used to push, pull and rotate a CubeSat’s solar panels without the need for sophisticated moving parts and heavy power usage. The alloy takes up less space than hydraulic or pneumatic systems and by eliminating pumps, gears, fluids and seals, there are fewer parts to fail.

“The amount of power available in CubeSats prior to solar panel deployment is very, very limited,” said Michael Ayers, a mechanical and energy engineering senior. “Until it goes solar, the CubeSat is essentially a phone with no charger. Once the battery is gone, it’s over.”

“For this project, we developed three separate shape memory alloy mechanisms for our CubeSat, named Penny, a retention mechanism that holds the solar panels in place during launch, a deployment mechanism that extends the solar panels into space and an actuator that moves the panels to follow the sun,” said Thurstin. “Applying a minimal amount of electricity provides all the mechanical energy needed to get the satellite up and running. We actually built a CubeSat to show just how the shape memory alloy system would work.”

Beyond controlling solar panels on CubeSats, the UNT teams’ research has applications in industries such as aeronautics, automotive, space, bio-medical and many others.